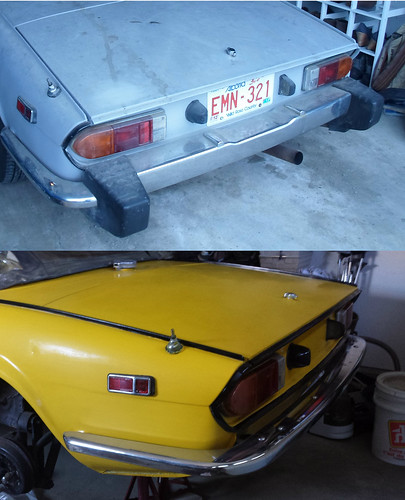 When removing my Triumph Spitfire’s bumpers in preparation for body work and paint I noticed the rear one was made up of several smaller pieces that were bolted together. I do not care for the thicker chrome section of the later Spitfires and after further inspection it looked like this would unbolt as well as the rubber over riders. So I’m converting my car to the smaller European style bumpers. At the rear at least you can do this for very close to free! I just needed to purchase some carriage bolts to cover the holes. At the front a swap to the smaller over rides will complete the conversion.

1978 bumper brackets. These also unbolt from the car.

The over riders unbolted

The extra bracket off. It came off easy on one side but a major pain on the other.

The centre chrome section off. Note the holes that need covered.

Because of the construction there was quite a bit of rust staining from the brackets and extra chrome bit on the rear bumper.

Fortunately it cleaned up pretty well with some soap water and steel wool.

The front bumper was pretty decent except some over spray brown paint.

Both the bumpers cleaned up really nicely.

I bought six carriage style bolts like this to cap off the holes in the rear bumper. On mine the threads went all the way up to the bolt head so I still needed a thicker washer to seat the nut flatly. Polished stainless steel bolts were recommended over chrome.

Looks much better with no visible holes with the bolts in place.

Before and after shots. A bit of paint work as well.

This entry was posted in Projects and tagged bumper, Triumph Spitfire. Bookmark the permalink.