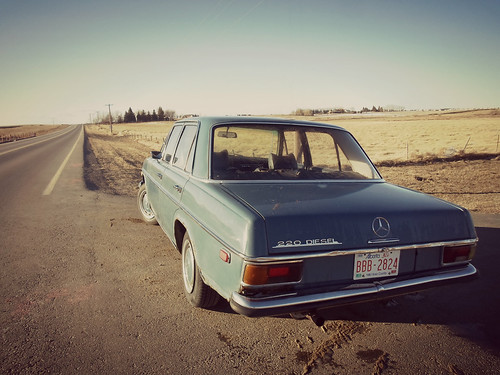 Here is my latest project car and my first diesel vehicle; a 1970 Mercedes Benz 220D sedan in an attractive blue colour (Biscayne Blue I believe). To make the low powered diesel at least palatable it has the four speed manual gearbox. I’ve driven it a little bit so far and while no one will confuse it with being fast it is not as slow as you’d imagine. Perfectly usable for around town, normal driving but there certainly isn’t much, if any, power reserve to draw on.

Known as the /8 these cars are divided into two classes based on number of cylinders. The W114 cars have six cylinder engines and the W115 cars like mine have either a gas or diesel engine with four cylinders. They have four wheel independent suspension with disc brakes all around.

The engine is a 2.2L OM615 diesel engine that produces either 59hp or 60hp depending on what source you believe. Mine was fully rebuilt not too many miles ago by the first owner. Given they have a reputation for racking up massive mileage I should be ok there. Interestingly I’m only the third owner of this car. 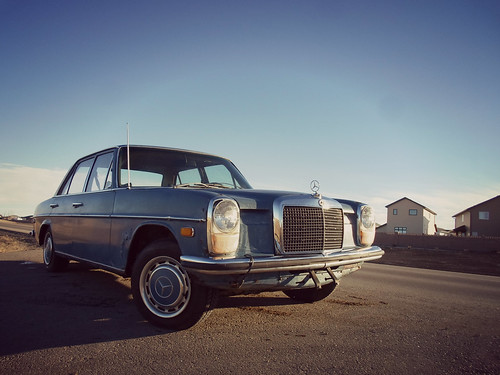 The photos show it to be in better shape than it really is. There is some body work to be done. Mostly on the driver’s side fender and rear bumper mount.

It is however very clean. Even the engine compartment is clean which is unusual for the price range I buy in. The suspension is a bit bouncy and noisy so that will need sorted before it goes back on the road. On the plus side the battery is new and the tires have a ton of tread on them. A thin whitewall on the tires would have been nice though. 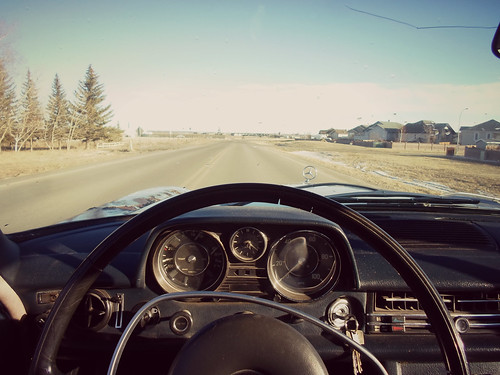 The interior is blue as well and in reasonable and usable shape. A few little flaws that can be corrected (gearshift level ball falls off) or lived with (small tear in one seat).

There are few bits to fix and source of course but I also bought a parts car to aid me in that. The parts donor is one year newer and slightly better equipped. It in some it ways looks better on the outside than the blue car but its core structure is more rusty.

The general plan is to strip off the parts I need from the beige one to help fix up the blue to a reasonable “driver” level. It wouldn’t be a perfect show car but something I can drive in the summer.